Since 1985, Texas Winds has brought music and friendship to thousands of local residents who would otherwise be left out of the cultural riches of our great city. 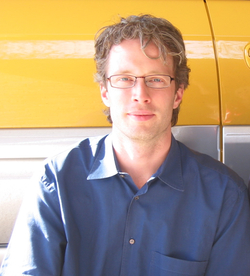 Mr. Barr began the study of bass at the age of sixteen with Roger Fratena of the Dallas Symphony. At Curtis, Charles was the last student of Roger Scott, longtime principal bassist of the Philadelphia Orchestra.

Upon graduating from Curtis, Charles became a member of the New World Symphony in Miami, Florida. He soon went on to become principal bass of the Charleston, S.C. Symphony and finally a member of the renowned Cleveland Orchestra at the age of 27.

In addition to his musical pursuits, Charles was a devoted record collector and an avid bicyclist having won several competitions in the Cleveland area.

On August 11, 2006 Charles Barr lost his life in a tragic bicycle accident. He was thirty-one years of age. A memorial service was held at Severance Hall at which time the Cleveland Orchestra endowed Charles' chair in the Orchestra in his name in perpetuity.

In September 2006 the Board of Directors of Texas Winds voted to name its series of educational musical programs for at-risk children the Charles Barr Concerts for Head Start.